South Oxfordshire’s thriving market towns with their independent shops, traditional butchers and quirky cafes are the perfect setting for Causton.

The most filmed location of Causton is a thriving market town with independent shops, traditional butchers and quirky cafes. Stay central and you won’t need the car for a couple of days. There’s a weekly fresh produce market (Tuesdays), small theatre, pubs with great character and good choice of restaurants. The Town Hall has doubled as both its Causton equivalent, and Causton Arts Centre.

Guided Midsomer tours of Thame are available weekly, on Wednesdays between May and October. Ad hoc tours on other days of the week can be arranged independently by emailing [email protected] You can book online, at Thame Museum or at the Town Hall Information Centre. The original location of Causton, Wallingford is a traditional market town that palyed a big role in English history and retains ancient castle ruins. The town centre, particularly around Market Place, offers independent shops, restaurants and cafes. The Corn Exchange small theatre/cinema was Causton Playhouse four times. The choir at the church is Midsomer Worthy choir.

There are a range of self-guided walks available from the information centre (including Midsomer Murders walks), plus the opportunity to walk part of The Thames Path. No market town is complete with a market or two - Wallingford’s Charter market takes place on Fridays and a local producers market is held on Saturdays. Featured once as Causton, Henley is a Riverside town with a Georgian facade of special architectural and historic interest. The town offers specialist shopping for art and antiques plus boutiques and curiosities. There’s a thriving Café culture, (or the more english version, afternoon tea, if you prefer), pubs, restaurants and a microbrewery, alongside town centre hotels and B&Bs. Other amenities include a Theatre, cinema, boat trips along the Thames, self-guided walking trails and the national River & Rowing Museum.

Surrounded by beautiful countryside for walks along The Thames Path, the Chiltern Way or Sustrans cycle routes, there’s even an electric bicycle network or an Environment Trail for kids or fun-loving adults. Find out more at the information centre based in the Town Hall. 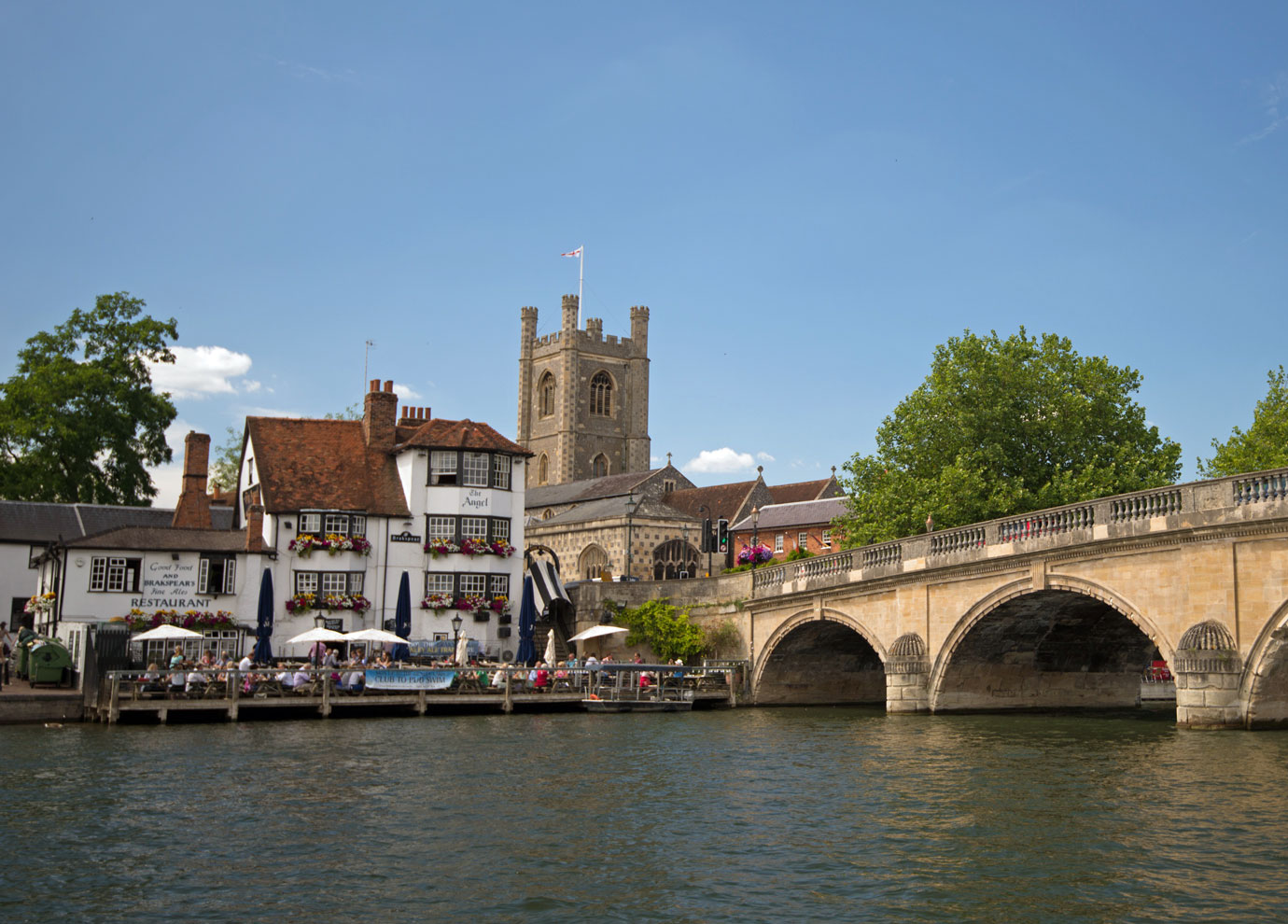 Reputedly England’s smallest town offers, as well as interesting architecture and history, a curious white mark carved into the nearby hill. Legend has it the 270ft triangular mark was designed by local squire Edward Horne in 1764 because he felt the church required a spire. Watlington is the heartland of the re-introduced red kites and is a wonderful vantage point to see these large and distinctive birds of prey in flight.

The library featured as Midsomer Library.

Marlow is without a doubt one of the loveliest locations on the River Thames. Situated on a broad sweep of the river between Henley and Windsor and alongside the woodlands of the Chiltern Hill. The charming Georgian market town is made up of historic streets, boutique shops and an abundance of character.

The historic market town of Marlow is home to ‘Causton’ Library featured in the episode ‘The Black Book’. Marlow library is where you will find the visitor information service and it’s a great place to start your exploration of the town.

The town is a mecca for foodies with a range of excellent cuisine including award winning pubs and restaurants, cafes and bistros as well as the locally renowned Rebellion Brewery.

Stay at one of the town centre hotels or B&B’s and head out to enjoy a stroll along the Thames Path or hop on board a boat trip along the river and take in the sights including the stunning suspension bridge and All Saints Church.

Other Midsomer filming locations in the town include The Two Brewers pub and the church gate in St Peter’s Street seen in ‘King’s Crystal’.

Marlow is an excellent base from which to explore over 30 more filming locations in the local area. Download the self-guided Midsomer Murders location trail of Marlow and the Hambleden valley.